For deep-pocketed style and status-conscious women, few symbols make as much of a statement as an Hermès’ Birken bag. A recent piece in Cosmopolitan magazine led with “I need a Birken,” and went on to describe just where the designer fashion accessory resided in the hierarchy of style for one upwardly mobile, 29-year-old fashion industry marketing executive:

“But if I had an expensive Birkin from Hermès — the holy grail of handbags, the ultimate fashion status symbol — I wouldn’t feel so self-conscious about my wardrobe, sorely lacking. A Birkin was the answer. And, it would be a good investment: It was probably going to cost more than $10,000 up front, but I could almost certainly sell it for a profit later. A Birkin would be good for my career, I told myself. Now I just needed to find one.” 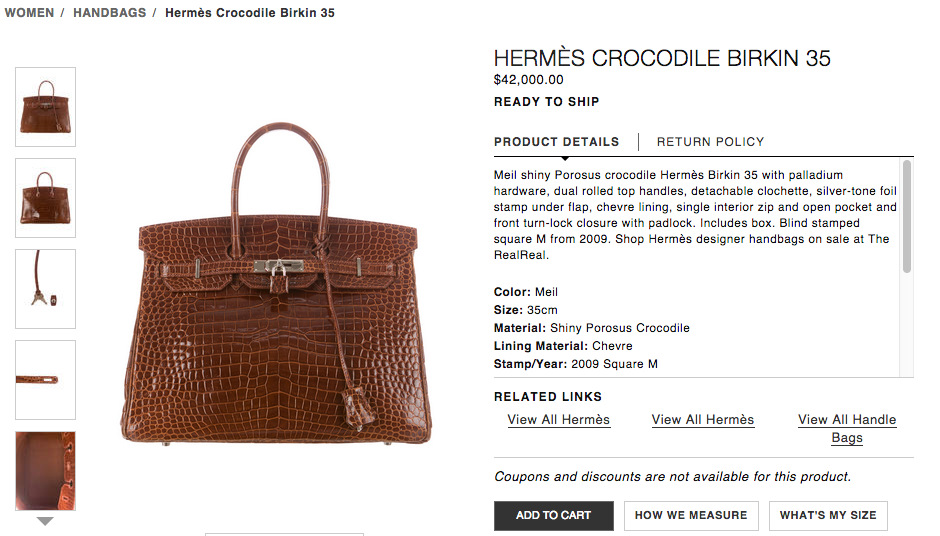 The Birken bag, named after British singer/actress Jane Birken, a resident of France, has literally achieved mythical status, until perhaps this week when Ms. Birken very publicly demanded that the French luxury goods maker remove her name from the bag.

“In a statement released to Agence France-Presse, Birkin said: ‘Having been alerted to the cruel practices endured by crocodiles during their slaughter for the production of Hermès bags carrying my name, I have asked the Hermès Group to rename the Birkin until better practices responding to international norms can be implemented for the production of this bag.'”

As the world set its sights (and their Yelp comments) on the heinous actions of a dentist from Minnesota who paid $50K to lure and kill Cyrus, a popular, rare black-maned (and geo-tagged) lion in Zimbabwe, the folks at PETA turned its attention to Hermès:

“”We call on Hermès to stop plundering wildlife, factory-farming crocodiles and alligators and slaughtering them for their skins. Once, Birkin bags marked people as celebrities or at least members of the super-rich, but soon, no one will want to be caught dead carrying one, and animal advocates will then breathe a sigh of relief.”

The power, persuasion and histrionics of PETA, a topic not foreign to this PR executive/blogger, can be credited with another victory today.

“PETA, on behalf of all kind souls in the world, thanks Ms Birkin for ending her association with Hermès, which makes grotesque handbags that were revealed in a PETA exposé to be constructed from the skins of factory-farmed and cruelly slaughtered crocodiles,” said PETA founder Ingrid Newkirk, following Birkin’s announcement.”

Still, did Ms. Birken knee-jerk in her demand that her name be removed from Hermès’ most iconic handbag? Was her decision to do so motivated by the bad PR such an association might have considering the revelations that surfaced in the PETA investigation? Should PETA have given the luxury goods manufacturer more time to mend its ways? I wonder.

Hermès expressed concern over what PETA alleged, and without overtly admitting guilt, promised to take action:

“Hermès respects and shares her emotions and was also shocked by the images recently broadcast…an investigation is underway at the Texas farm which was implicated in the video. Any breach of rules will be rectified and sanctioned.”

One bi-product of this (temporary?) Hermès-Birken split that will surely give Birken bag owners reason to rejoice: their pricey possession most certainly will appreciate in value.