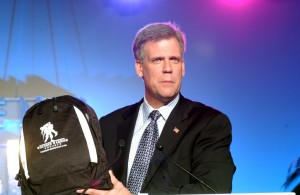 Word has it that Tony Snow, Fox News anchor, has been asked by the new White House chief of staff to replace the perennially beleaguered Scott McClellan in this rock-and-a-hard-place position.

Makes sense. After all, in addition to the speechwriting duties Mr. Snow performed for George H.W. Bush, he’s been well-prepared in his current position as a spokesperson for this administration. One outlet reports that “Neither Snow nor the White House would comment.” Not surprising.