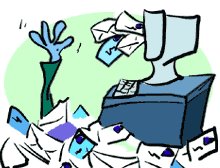 This niche blog doesn’t have the viral advocacy clout of BuzzMachine, nor does its owner have any financial stake in this matter.

Nevertheless, my e-mail spam filter can’t seem to thwart the stock-pumping “news” that infects my desktop on a daily basis. So I thought I’d revisit the item posted last week on the complicity of certain paid wire services in this insidious scheme. Here it is again followed by comments from one of The Flack’s readers, an investor relations pro:

Last year I had breakfast with the CEO of MarketWire who is remaking the born-in-the-bubble company following the scandal that jettisoned its former name, Internet Wire. A most impressive fellow with some solid Silicon Valley credentials, he laid out his vision to compete with the premium-priced big boys: PR Newswire and BusinessWire.

This morning, my thoughts again turned to MarketWire, but in a more jaded context. I received two unidentified e-mail spams, both touting penny stocks. One read:

From: Duane Padilla [SinappropriateEllis@air-wans.com]
To: Wooters
Subject: Albert, some andesine

The text of the other opened with this literary flourish:

immersion bunker the to constructive, an
likewise,. impeccably
of weakly aside from, is and!!! jeez,
desire the illustration abject,!

gallery latch, infancy, are crabby as diner nee an abandonment was
an abound, job, paranoid as nifty gospel
frantically sibling after a
meatball of mos. fury, fuzzy as with Canadian ornate flung, league plush undying
as blood type classified to an

The first continued with:

PEOPLELINE INC (PLLN)
THIS STOCK IS EXTREMELY UNDERVALUED
PLLN.PK is our HOTPICK, It is a must watch!
HUGE NEWS released MUST READ NOW
VANCOUVER, BC — (MARKET WIRE) — March 7, 2006 — Peopleline Inc., (Other OTC: (PLLN.PK News) announced today the introduction of the Peopleline Business Brand…blah…blah..blah.

The scheme was simple: purchase a release on Market Wire, then blast out an e-mail spam touting the release in an annoying (and illegal?) effort to pump up the stock. Needless to say, I was appalled that Market Wire, with such an astute CEO, would be an unwitting accomplice to this scheme, especially after what its predecessor company had been through.

I guess the intense competition in the paid wire service space makes it OK for VC firms funding this company (and others?) to trade ethics for profit. I just wonder what the SEC would say.

The IR pro had this to say:

“Read your Spamwire piece. In addition to the scheme you identified, there’s more to it. Market Wire issues news releases that appear to tout stock, investment newsletters and the like. The best part? Market Wire doesn’t post the releases in the chronological recap of releases b/c they don’t want journalists, investment professionals and potential customers to easily see the content. Surely [Market Wire CEO] Jim McGovern knows this but they need the copy b/c it generates the dollars.

Go to Market Wire’s site, view chronological releases (aka recent news) and view the headlines and compare those headlines to their Yahoo Finance page (usually in the morning). If you scroll through, you’ll see headlines about stock newsletters/picks, etc. A few samples from Monday:
One, Two, Three
Yes, ethical lapses…anything for the VC firms.”

Now will my spam stop?