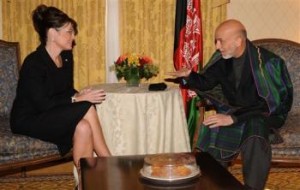 I wonder if McCain campaign COO Steve Schmidt pulled a Tom Cruise and hired his sister?

Here’s campaign spokeswoman Tracey Schmitt’s explanation given to reporters who were barred from capturing Sarah Palin’s first date with a foreign leader.

“The decision was made for this to be a photo spray with still cameras and video cameras only.”

Apparently, the McCain campaign’s command-and-controllers thought they could actually pull of a portrayal of Mrs. Palin as a world leader by limiting coverage to images and no questions. According to The AP:

“At least two news organizations, including The Associated Press, objected to the exclusion of reporters and were told that the decision was not subject to discussion.”

CNN, the pool camera, threatened to pull its coverage altogether after its producer was told to “talk to the hand” by McCain’s Bush/Rove-inspired PR team. The producer was finally allowed in for a 40-second glimpse, just enough for the Palin-Karzai photo-op.

As if America hasn’t endured its share of opaqueness and deception these last seven years, be prepared for more of the same in a McCain presidency.