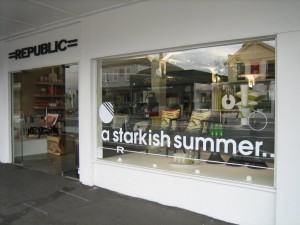 From the land of the Kiwis, we learn that a local PR agency induced journalists with an all expense paid trip to the greatest city in the world, in exchange for adding the name of its client’s new drink, disguised as an adjective, into their stories. Many imbibed the bribe, and that’s where the debate started.

Influx Insights reports on the ethical dilemma, which ensnared a local TV reporter. Her news director boss made no bones about his “starkish” feelings: “If she wins that trip, she won’t be going,” he said.

In fact, a blog dubbed The Starkish Debate is tracking places the word has appeared. “They include a cappuccino topping, advertising for a clothing label and an entry in the online encyclopedia Wikipedia, which has since been deleted.”

There are some among us who may praise the agency for its creativity and ability to game the digital landscape. (These are the same people who thought Janet Jackson’s wardrobe malfunction was a stroke of PR genius.)

Personally, I think the initial idea is kind of fun. It’s the execution thereof that left me high and dry…especially these days when we find ourselves taking it on the chin.