Anyone with a stake in a technology (or any other) startup will certainly appreciate the challenge entailed in prolonging editorial interest in their fledgling investment. Once the initial flurry of hyper-activity in the news and social spheres evaporates, how can a founder (and his PR consiglieres) build “legs” to ensure long-term success?

In the beginning, it’s a no-brainer to tap the startup’s connected VC to trumpet the company’s name and narrative to his or her friends, fans and followers. Then there’s the exclusive dib a PR firm might call in to one of the TechMeme-destined social media or tech news sites.

But a couple months have now passed and the conversation has moved on to some other shiny new object and the site’s growth has flat-lined.  The cool kids took a taste, but the masses have not followed their lead. That effusive “launch” media coverage in TechCrunch, Mashable, TheNextWeb and/or GigaOm may have elevated egos, but their resonance was short-lived in today’s fragmented, self-selecting and ephemeral media world. 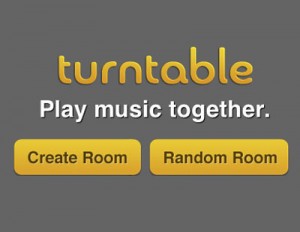 In a recent Inc. Magazine profile titled “Turntable.fm: Where Did Our Love Go?” about the once high-flying DJ-wannabe driven startup (that this blogger personally adored until it became a total time-sync), Burt Helm wrote:

“The whimsical site they released, where users posed as cats and bears and spacemen playing songs together in a chat room that resembled a rock club, attracted more than 360,000 users in three months, then $7 million in funding at a $37 million valuation. Even celebrities backed it: Jimmy Fallon, Ashton Kutcher, and both Lady Gaga’s and Madonna’s managers invested. Turntable “has upended how I listen to music,” blogged New York Times editor Sam Grobart in a post titled “Spotify is great, but Turntable.fm is Amazing.”

Then traffic started falling. By autumn, it dwindled to less than half its peak, and the very same tech watchers started wondering whether it was all over. Goldstein says he can hear the doubt in the voices of his Silicon Valley friends. “I can tell now when people say, ‘How’s it going?’ they mean, ‘You’re flattening, aren’t you?’ “ 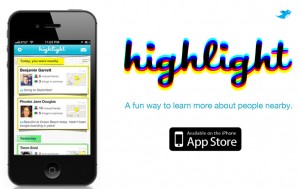 Highlight may be an even bigger poster child for a startup whose initial hype came and went, and now finds itself struggling to keep its media mojo. I touched on its coming out party here, but Digital Trends’ Molly McHugh reported more recently on the whole SoLoMo category in a piece titled “Hyperconnected Hangover:”

“Unfortunately, all the SXSW buzz may have come too early. Since the show, these apps have been quiet to incredibly quiet for me. Sure, Portland, Oregon isnâ€™t New York â€” but it isnâ€™t the midwest either. Yet the last time I got a notification from any of these apps was weeks ago.

When I spoke with Highlight creator Paul Davison at SXSW, he conceded that while he was happy with all the enthusiasm for his app, he was also worried the setting was going to create a false sense of ubiquity â€” and that when we all went back home and werenâ€™t able to browse our neighbors and wonder at all the things we had in common (and come on, Interactive week is full of us nerds) it would be disappointing.

And it kind of has been. And the next big update for any of these apps is still on the horizon. So itâ€™s easy to get a littleâ€¦ uneasy about their future”

Business Insider‘s left coaster Matt Rosoff piled on with this Q&A with Highlight CEO titled “What It’s Like Being The Over-Hyped Talk Of Silicon Valley” in which he asked:

“What’s it like becoming the talk of the town and then experiencing a crazy about-face? How do you survive the hype bubble?”

Meanwhile, Highlight’s primary competitor in the SoLoMo category, Glancee, which didn’t receive nearly half the media attention at SXSW as its rival, was gobbled up by Mr. Zuckerberg and company over the weekend.

Nowadays, there exists no PR panacea that will anoint and sustain a startup for the long term.  In fact, too much initial coverage at the outset may actually work against a company in its efforts to maintain visibility and media buzz.

This dynamic has not changed since I started in the biz eons ago nor is it indigenous to tech startups.  This dynamic also rang true in my first job toiling the motion picture PR space. Of course, a film’s fortunes were determined by its opening weekend box office, so front-ending the PR made perfect sense. (Front-ending the hype around the film’s principals is another story.)

Here are a five directional pointers to may help keep the ball moving forward:

Finally, I would say that none of these tactics alone will sustain a startup for the long haul.  Too often, impatient startup founders will pull the PR plug after that initial spate of boffo coverage failed to provide the coveted sea legs (and user growth) they imagined it would.  “The PR didn’t work,” one groused.

In today’s cacophonous media environment and social media-driven world, long term viability demands the constant and thoughtful application of a range of strategic communications initiatives over time, i.e., six months+. Sure, it’s nice to have The Times or Journal give your startup a star turn. But we live in real-time where few pieces in today’s New York Times will have more than a 12-hour shelf life.

For a look at the burgeoning NYC tech scene, tune in tonight (Wednesday) at 7pm ET for a livestream of this month’s New York Tech Meetup where a handful of startup founders have five minutes apiece to showcase their creations.