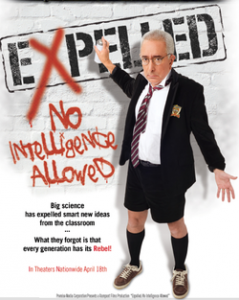 What’s gives with Ben Stein? Could it be his years of putting words in the mouth of Richard Nixon have finally come home to roost? This lawyer, actor, comedian, economist, White House speechwriter, and newspaper columnist is poised once again to reinvent himself — this time as advocate for the religious right, or more specifically the clandestine campaign to insert religion into U.S. schools.

Yes, folks, the latest star turn for this chameleon of a man has him propagating the theory of intelligent design in a soon-to-open motion picture called “Expelled.” The film’s marketing campaign may remind one of Mr. Stein’s most memorable role as the teacher in “Ferris Bueller’s Day Off” with a tinge of Jack Black’s “School of Rock” thrown in, but don’t be fooled.

Mr. Stein has borrowed a page from Moore and Gore to use the world’s most popular medium to advance his POV. Unlike Moore and Gore, however, the pre-release flavor of Stein’s new film masks its real intention through a comedic persona more akin to Rodney Dangerfield in “Back to School” than William Jennings Bryan in the Scopes Monkey Trial.

The makers of “Expelled” have obviously used intelligent design in designing the movie’s marketing campaign. If only “Flock of the Dodos” had the same star power.