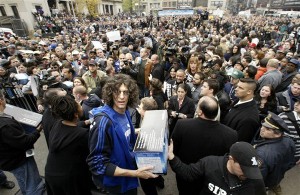 The blitzkrieg is on. Viacom-owned Infinity Radio, the company on whose airwaves Howard Stern gained national notoriety only to be abandoned for the big paid bird in the sky, will be trampled upon at least two more times.

Viacom’s CBS unit (for now) will allow the traitor to promote his new competitive media channel on the broadcast network’s top news and entertainment programs, “60 Minutes” and “The Late Show with David Letterman.” This in spite of the incessant disrespect and degradation Mr. Stern has heaped upon Infinity during his reign (and with particular vitriol these last few months).

Other than his ubiquity on-air, at raunchy parties and at PR events, Mr. Stern has done relatively few interviews to further fuel his infamy. Why should he? He has multiple (controlled) public pulpits from which to pontificate. As a result, his heretofore unavailability has enhanced his “mediability,” thus allowing Sirius PR man Patrick Reilly to pretty much pick and choose in and on which media to “place” Mr. Stern. Steve Huvane, you listening?

Now let’s watch for Mr. Stern with Katie and Matt, and the “ET,” “Access” and/or “Extra’s” of the world.