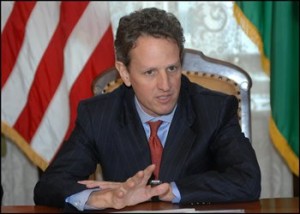 The lead op-ed in today’s New York Times features U.S. Treasury Secretary Timothy Geithner explaining in his own words the rationale and machinations behind the bank stress tests whose results will pop big time later today.

Already, the Treasury Dept. selectively leaked some of the test’s more tantalizing tidbits in an effort to temper the anticipated tumult in domestic and world markets.

The Times‘s op-ed page editor’s acceptance of Mr. Geithner’s submission was a no-brainer. After all, Mr. Geithner, the ultimate authority on today’s lead story, was willing/eager to share his unadulterated opinion — exclusively — with a news organization whose influence continues to hold sway over the national news agenda. (I wonder if he followed the prescribed op-ed submission procedure? Nah!)

Did Mr. Obama’s PR consiglieres consider offering Mr. Geithner’s prose to the Wall Street Journal‘s editorial pages? Probably not, given those pages’ political proclivity, i.e., today’s Journal carried a first-person piece by Karl Rove making a thinly-veiled case for yet another right-wing reactionary to join the Supreme Court. Anyway, Mr. Geithner had his turn in the Journal back in March.

Could the administration have better advanced its POV by solely posting Mr. Geithner’s words on the U.S. Treasury’s website or by direct communications with the millions of Americans in its database? Probably not. MSM still has the capacity to catalyze the conversation, though the deployment of d-to-c options should not be mutually exclusive. You’ll notice that Treasury did build a special sub-site to explain its economic stabilization plan.

Anyway, let’s see if the administration’s PR maneuverings in advance of today’s roll-out achieves its goal of reducing market stress.