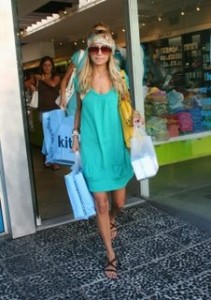 Just out of college, I was toiling for a small entertainment PR boutique in NYC. One of my first clients was the city’s perennial highest-grossing tourist tr– restaurant Tavern on the Green. We also handled its sibling — the original First Avenue singles mecca Maxwell’s Plum (not to be confused with its other, more austere eventual sibling the Russian Tea Room). Both were owned by the late, less-than-austere Warner LeRoy, son of motion picture scion Mervyn LeRoy.

Anyway, we were charged with alerting the paparazzi should, by chance, a celeb saunter in for a quiet meal. And saunter they did. A week didn’t go by without the tabloids running a couple of photos of some film, music, theatre, or TV star entering, leaving or, God forbid, seated in the Crystal Room with his or her family. It was celebrity exploitation at its best, and I was told that Mr. LeRoy couldn’t have been more pleased.

Flash forward to today. The owner of chi-chi Beverly Hills boutique Kitson has sued US Magazine for NOT giving the store photo credit on its glossy pages. The suit alleges that the weekly purposely omitted the store’s name and photo-shopped out pictures of its shopping bags in its reportage of celeb comings and goings.

The suit claims the lack of publicity is costing the store $10,000 per week!

Now do you think this legal ploy will put Kitson back on the “ins” with US? Gee, let me think about it.

My advice: consider tipping off The Star, People or In Touch Weekly for your celebrity exploitations. All three have L.A. bureaus.