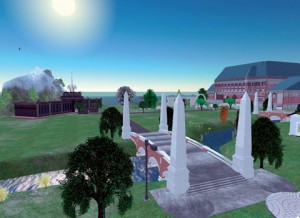 The sun has risen, the sun has set, the sun also rises. Back in the day when Peter Lewis was breaking new ground on the nascent consumer tech beat for The New York Times, we were toiling for a MA-based company called Apollo Computer, which made workstations.

The media pitch revolved around how enterprises could now afford supercomputing power without having to lease another building to house it. I think I even tried to convince Lewis of the merits of the story…to no avail. Today, of course, that supercomputing power would probably pale next to one’s Blackberry.

Apollo’s nemesis was an upstart California company led by a brash, outspoken and soon-to-be industry legend named Scott McNealy. Well, we all know how Mr. McNealy took his fledgling workstation company, Sun Microsystems, to the pinnacle of tech stardom in the Valley and beyond at the expense of Apollo and others like it.

Sun became a key client of my next agency where I had a chance to briefly meet Mr. McNealy. I was asked to accompany him to a “Today Show” interview following his Congressional testimony lambasting Microsoft for its monopolistic ways. We were in the green room at 30 Rock, and I figured I should chat him up about what he planned to say. With little prompt, he offered this metaphor: “Imagine if you owned the alphabet…and you had the ability to add or subtract letters at whim. This is Microsoft.” Well, that was good enough for me. I kept quiet after that.

In spite of McNealy’s winning ways — boy is he a great communicator! — Sun hit hard times when the tech bubble imploded. Since then it has struggled to regain its mojo, and to some degree has, which brings me to the catalyst for today’s posting: Second Life.

I remember ten years ago telling friends about avatars and how virtual communities would one day meld the physical and virtual worlds. Even Steve Rubel predicted that Second Life represents the next big thing. I’m not so sure about the hype, even with some 800,000+ Second Life residents. Sure, many are tech influencers — or e-fluentials as my old friend and colleague Leslie Gaines-Ross liked to call them. Some are gamers, and many, I’m sure, are lonelyhearts looking for a little diversion in their ho hum lives.

I was therefore interested to hear that tech PR firm Text 100 opened “an office” in the growing virtual community and, by doing so, generated some good industry buzz for itself. Next week, Sun’s co-founder and head of its gaming division will hold a presser in Second City — in the guise of his avatar — to court the “droves” of “software development professionals” that Sun’s agency consiglieres say reside on the site.

A cool and certainly mediable idea, but I’d be curious to learn whether this tactic measurably motivates the software developers, or whether this virtual event by virtual characters in a virtual community is the end game in and of itself — by virtue of the media buzz it generates.

More significantly, we learn this week that Sun president Jonathan Schwartz (an A-list blogger) has requested of the SEC to allow him to break company news on his weblog:

“If we have material news to disclose, we have to hold an anachronistic telephone conference call, or issue an equivalently anachronistic press release,” Schwartz wrote in his online diary Monday. “I would argue that none of those routes are as accessible to the general public as a blog, or Sun’s Web site.”

Now this is real news the PR profession needs to follow.