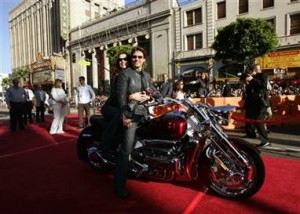 The marketing team for “War of the Worlds” will likely concur that the star’s advance media noise plus the film’s multiple “premieres” (sans working media) have helped elevate Steven Spielberg’s rendition of the HG Wells classic to “a box office record”, albeit on a Wednesday. Personally, I’m not convinced that the Scientology-fueled pre-release interviews helped the box office at all. This film had all the ingredients for a big showing with or without the ubiquitous command and control TomKat duet.

However, the marketing license to deploy a superlative to quantify the opening box office does play a role in the overall PR plan. Opening day bragging rights is somewhat of a holy grail for theatrical film marketers. Hence, the $21.3 million raked in by “War of the Worlds” made it the biggest Wednesday debut for a Paramount Pictures movie. Personally, fewer qualifiers might motivate me to see it.