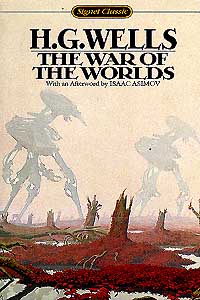 Talking about screenings, while the Smithsonian didn’t completely pull the plug on its decision to screen a film realted to Darwinian theory, Steven Spielberg did. Today it was announced that he was cancelling the world premiere event of “War of the Worlds,” scheduled for later this month in Tokyo. (I’d say that “War of the Worlds” is Darwinian in nature, wouldn’t you?) Mr. Spielberg cited the prospect of piracy at the chosen venue as the reason for the newsmaking cancellation.

I would guess that this Tom Cruise-starrer directed by Steven Spielberg based on the H.G. Wells classic wouldn’t need much help on the publicity front. Even so, this global bump in awareness several weeks from release, and the explanation for it, all but insures it. It’s either a brilliant publicity ploy or the premiere’s advance team blew it.