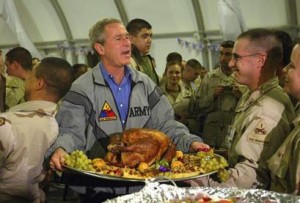 I do my best to avoid getting mired in the nasty political discourse that has gripped the nation. Still, the PR machinations of the Bush administration offers so much good material for this blog, it’s almost impossible to ignore. Take Scott McClellan’s recent tirade aimed at the press corps, or the “spontaneous” exchange between the President and some U.S. troops that was anything but.

I’ve written about the Presidential press secretary’s trials and tribulations in the past, and will only say that Mr. McClellan is just doing his job by keeping the members of the fourth estate on their toes…and vice-versa. However, Mr. McClellan must admit that his job is made much more difficult when the recipients of his daily message view him as disingenuous.

On the subject of disingenuousness, the recent Presidential presser that was billed as an unrehearsed conversation with the troops ranks right up there. From the post-event reports, it seemed that this “unscripted” exchange backfired big time.

There is nothing worse than appearing to manipulate the news media — except perhaps a straight-faced lie. Both are sure-fire recipes to burn bridges with those on whom you rely to deliver your messages. Sure, orchestrated PR events happen every day, and the news media have even learned to tolerate them…within reason. But it’s one thing to bake the world’s largest pumpkin pie, and quite another to stage a war.