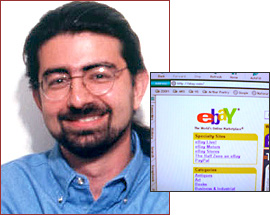 With all the hoops many companies jump through to exploit an anniversary ostensibly to gain media attention, today’s editorial in The New York Times on the simple vision of eBay founder Pierre Omidyar, pegged to the company’s 10th anniversary, says more about the culture and spirit and business model than all the manufactured, celebrity-filled, photo-opportunistic anniversary fare to which we as PR practitioners are accustomed to dusting off and doling out. (Witness Amazon’s 10th.)

Truth be told: in the eyes of the news media, company anniversaries, more often than not, are viewed as non-news events. There’s one for every day of the calendar year. Coming back to Mr. Omidyar, who happens to be an alum of the college I attended, it helps that he has demonstrated a heartfelt commitment to “doing good” while “doing well.” His Omidyar.net, an online community that strives to build a better world, likely influenced the tonality of today’s editorial in The Times. Kudos to Henry Gomez and the communications team at eBay for keeping the dream alive.