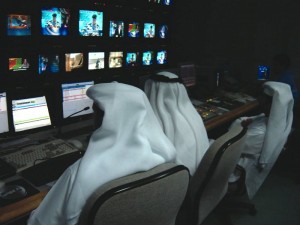 Last week, a man was arrested in Staten Island for selling satellite access to The Hezbollah Channel (THC for short, home to the hit series “The Falsettos”).

Actually, the Feds moved in since they consider Hezbollah a terrorist organization and its broadcasting arm, Al Manar Television, a tool for terrorist propaganda.

This morning I stumbled across a short item in an Israeli newspaper in which a former Director in Ariel Sharon’s office (incongruously) compared Al Manar’s one-sided editorial output, and it $15-20 million annual budget, to the relatively tiny sum spent on PR by the state of Israel.

“‘Al Manar’s broadcasts are “pure propaganda, but they are professional and are carried worldwide via satellite and cable,'” he said. ‘We need to recognize that the media is a tool and that it can serve as a weapons system. Hizbullah is 10 years ahead of Israel in the ability to use and manipulate the media for its strategic purposes.'”

Is this former Israeli official saying that PR people are “propagandists” who “manipulate” the media like “tools?” Professionally, I give mainstream news organizations (versus media commentators) more credit for trying to present a balanced picture. After all, Al Manar will never win a DuPont Award.

Perhaps the official is suggesting that Israel should invest in its own propaganda channel? After all, the Bush administration tried (and is still trying) its hand at this tact.

Israeli Gov’t PR people: The notion of commandeering an Israeli news organization to overtly advance your nation’s political agenda would be a mistake of grand proportions. You’d be much better served by investing in digital video, RSS, and an army of expert and earnest commentators to spread your messages. It’s happening in Iran, though clearly not government-induced.

Give your mainstream and citizen journalists access to more expansive information — in digital formats — then let them do their jobs…in the name of democracy.