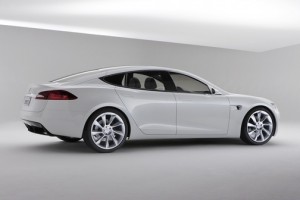 OK So your employer’s much-ballyhooed efforts to build the first electric high-performance sedan has hit the skids. How can you rev the engines to get it back on track?

Elon Musk’s Tesla Motors, which has seen its share of bumps in the road, this week gained some attention when it asked Digg founder Kevin Rose to remove from Flickr an image he posted of Tesla’s not-yet-built, but imminently “launching” Model S sedan.

Apparently, the Model S had bigger plans for its coming out party — or did it? Did Tesla intentionally leak the image for buzz-building purposes, or did it simply lose control over some ill-conceived embargo? 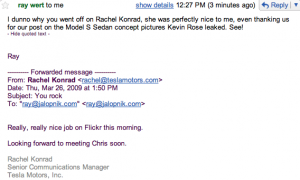 Ms. Konrad, a former reporter, is clearly learning the ropes of dealing with jaded journalists. On Wednesday, in a piece titled “Tesla Flack ‘Bitches About Silicon Valley Gossip Blog,'” said blog reported her pointed exchange with an Australian communications consultant who apparently cited the blog in his own post questioning Tesla’s ethics.

Personally, I’d like to own one of these cars, if it ever gets built. Jalopnik called it “vaporware,” and that “gossip blog” suggested that Tesla’s acting in a “fraudulent” manner:

“For Tesla, any publicity is good publicity. The Model S unveiling is Tesla’s last-ditch hope at a future in the business. Although it does not have financing for the production of the Model S, or even a site for a factory to produce it, Tesla plans to take deposits for the $58,000 vehicle from customers, a move at least one Tesla executive deemed fraudulent, prompting his departure.”

At least the images are way cool.