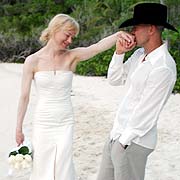 Forget the florist, dress designer and entertainment, today the most important contributor to a celebrity wedding is the public relations advisor. The deft management of how the news and pictures are released so that they permeate the public consciousness has become an art — Douglas/Zeta-Jones, Jones-Reynolds notwithstanding.

So when A-list celebs, Rene and Kenny, surprised their distinctly different sets of fans by tying the knot under the public radar, it was big news. The photo of Kenny kissing Rene’s hand on the beach, appears to have been released by the dress designer (!) Carolina Herrera’s PR team via The AP (most likely in exchange for the cost of the dress).

Let’s keep an eye on what other media deals have been struck in the days ahead. As far as the lasting power of this most unlikely couple: my prediction is less than a year.