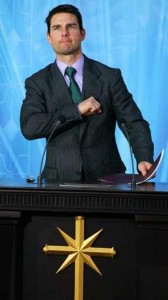 When “60 Minutes” arrived on the scene, many PR pros didn’t quite know what to make of this new longer form investigative TV news program. We were not accustomed to having our charges ambushed — as the tape rolled. The techniques of command and control had yet to flourish.

Many PR types counselors knee-jerked to the company’s legal department to put the kibosh on a potentially libelous segment. But the C&C crowd believed that if caught early enough, even a predisposed “60 Minutes” piece could be softened or balanced.

To do so, however, required an effusively articulate, yet congenial executive armed with the facts and ready to rumble. (This was a time when the top tier news organizations actually sought balance.) If the news outlet could be convinced that the story premise didn’t hold water, the piece could very well be killed.

Even so, the on-air investigative crowd soon recognized that the visible trauma inflicted on the interviewee made for better television than the veracity of the segment’s story line…especially during sweeps. Unflattering close-ups, the element of surprise, and demeaning camera angles, along with creative editing all contributed to the ratings cause.

One technique we used to counter the news program’s growing quest for drama entailed taping the taping. In exchange for access to our newsmaker client, we demanded (and were granted) the right to film the interview. When the news crews’ cameras shut down, so did ours. We would then have unedited footage to make available on an as needed basis, but with few outlets on which the public could view it.

Flash forward to today. “The Lede” in today’s New York Times online reports on how the Scientologists ambushed a BBC “Panorama” reporter, capturing him on digital video in an especially unflattering light. The church of Cruise, Travolta and others then built a website (albeit, a cheesy one), and turned to YouTube to pre-emptively discredit the Beeb in advance of the venerable news organization’s forthcoming documentary on the cult-like organization.

The option to appeal directly to the church of public opinion didn’t exist back in the embryonic days of investigative TV news. The news filter diminished any effort to counter-attack a negative story. That obviously has changed with the empowerment of anyone to make and disseminate content as they see fit.

Surprisingly, and ironically, the Beeb countered the ambush of its reporter by creating and posting its own anti-Scientology clip on YouTube. Oh, and it filed this report as well. I wonder which of the two will have greater legs?