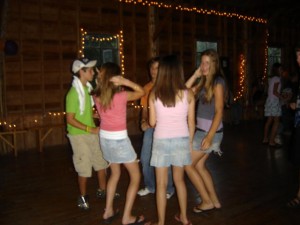 If you ever went to summer camp, you likely remember the boy-girl socials. It worked like this: the campers were herded into a large social hall (with wood plank floors, no doubt.) The canned music blared as the girls immediately gravitated to one end of the cavernous space, the boys to the other.

For a half hour or so, furtive glances were exchanged across the vast, seemingly impenetrable void that separated them. Suddenly, a couple of the more brazen, i.e., “cooler” campers tentatively (no one was that cool) waded across the room to request a dance of his or her carefully scoped-out partner. God forbid if the overture was rejected!

Following PRWeek.com editor Keith O’Brien’s lead in capturing (reg required) some new media pros’ predictions for the second half of the year, Andy Lark gave us his take on new media trends to tune-in to. One of his primary take-aways: pay heed to social networks, communities and “conversationalists.” (We sure could have used a few of the latter back at the social hall.)

In his posting, Andy links to joga.com, a social network for soccer enthusiasts created jointly by Nike and Google. How smart is that! Late yesterday Newsweek posted a piece wherein we learn about Essembly, a young, thinking-person’s online community that offers lively debate, but more interestingly, rates members based on their social or political compatibility. So here you have an intellectual forum that facilitates social interaction based on one’s politics.

We all know that much of the success of Facebook and MySpace is driven by the (other) “S” in Social Media. I suspect Second Life also derives some of its juice through this all-too-natural means.

Nonetheless, the Joga.com and Essembly examples further point to the huge opportunity (for PR pros) to help clients build viable social networks not solely driven by the prospect of hooking up. It’s not just partnering with one of the established social networks, but it’s having the technical and strategic wherewithal to coalesce their clients’ constituents into a custom online community built around a shared interest or passion germane to the client’s business. If our industry doesn’t make the move across the social hall to own this conversation tool, others certainly will.