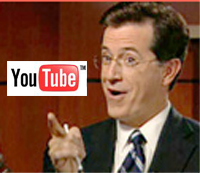 Last month, this blog cited the always citable Mark Cuban about the copyright-challenged YouTube. I think he said at a New York advertising conference that “anyone who buys that (YouTube) is a moron” because of potential lawsuits from copyright violations. (He later took a moment to add his comments to this blog.)

Well, we all know what happened next. The $1.65 billion deal of the decade, notwithstanding, Mr. Cuban’s assertions still hung out there. Pretty soon YouTube ramped up the PR with a string of joint news releases with the major content providers partially paving over the litigious road ahead.

One related announcement had YouTube agreeing to remove all of Comedy Central’s content from the site…or so we thought. My clued-in colleague Colin just informed me that the much-ballyhooed announcement had no clothes. With 300+ Diggs, Jon Stewart lives again on the video site.

Some clever alphabetical manipulators took a page from the purveyors of V!ag5a to sidestep YouTube’s filters and give Mr. Stewart the second life he deserves.

I just hope that Diebold’s voting machines are not as susceptible come this Tuesday. Good weekend, everyone.