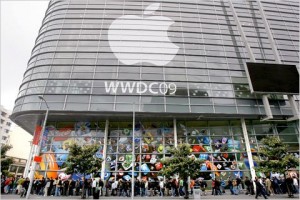 As the world turned its attention to Apple’s WWDC yesterday to hear the carefully crafted news of the $1199 13″ Macbook Pro and the “stronger” iPhone 3GS, other influencers, including The Times‘s inimitable gadget guy David Pogue, opted to attend the suddenly de rigeur Webby Awards in New York City.

He wasn’t the only digital luminary who graced the red-carpeted, white table-clothed awards dinner. Other bold-faced digerati included Arianna Huffington, Biz Stone, Gary Vaynerchuk, Nine Inch Nails’ frontman Trent Reznor, SNL’s Seth Myers (who hosted), Cameron Diaz (who presented Webby Person of the Year to Jimmy Fallon and who follows exactly no one on Twitter), and Charlie Rose who introduced Sir Tim Berners-Lee as winner of the Lifetime Achievement Award. (There were so many others, but not this blogger.) 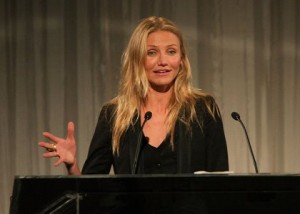 WSJ.com’s “Speakeasy” blog had this headline:

“Tonight, the crÃ¨me de la crÃ¨me of the Internet scene will be waltzing down the red carpet at New Yorkâ€™s Cipriani Wall Street to be honored…”

I especially liked the micro-acceptance format in which all awardees were limited to just five words (versus 140 characters). Ms. Huffington used Twitter to crowd-source her five words for winning “Best Politics Site and People’s Voice for Best Political Blog:”

Anyway, this sure beats the blah blah blah of the myriad self-aggrandizing social media and future-of-journalism panels. My favorite gadget guy Pogue, who did end up reporting on WWDC, summed it up to Gillian Reagan (@gillianmae) of the New York Observer like this:

“In all seriousness, it looks as though, from the size and prestige of this, that this whole thing about Web 2.0 means that ordinary people will have a stage, that true broadcasting talent doesn’t need an organization behind it, has come true!” Mr. Pogue said. “I mean, half of these people, total unknowns, have been discovered purely through merit alone.”

Even with the success of the Webby’s, the very nature of the medium almost always spawns a dose of digital discerners. This is CNET’s Caroline McCarthy’s headline from her Webbys post today:

“Do we still need the Webby Awards?”

To her credit, she left the door open to debate on the micro-blogging platform du jour:

“Digital media’s triumph is cause for celebration from all sides. And the Webbys team puts on a well-run, enjoyable show every year. But the increasing presence of celebrity is a sign that maybe this is an industry that’s outgrown the need for a quirky awards ceremony. Or maybe it isn’t. I’m sure there are plenty of people who’d be happy to debate the point on Twitter.”