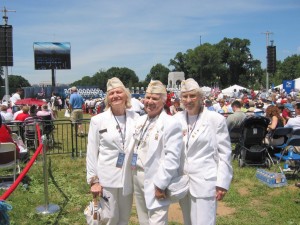 Happy Memorial Day everyone. Hmmm, isn’t that an oxymoronic expression, especially when one considers the constraints placed on journalists by a DoD intent on restricting coverage of this war, and by so doing, dishonoring those who sacrificed their lives and livelihoods fighting it?

This is from The Times’s David Carr’s “Media Equation” column today:

“If Joseph Heller were still around, he might appreciate the bureaucratic elegance of paragraph 11(a) of IAW Change 3, DoD Directive 5122.5: ‘Names, video, identifiable written/oral descriptions or identifiable photographs of wounded service members will not be released without the service memberâ€™s prior written consent.'”

James Glanz, the incoming Baghdad Bureau Chief for The New York Times, had this to say:

“‘As the number of reporters there dwindles further and further because of the difficult conditions we work under, the kind of work they are able to publish becomes very important,’ Mr. Glanz said. ‘This tiny remaining corps of reporters becomes a greater and greater problem for the military brass because we are the only people preventing them from telling the story the way they want it told.'”

Even so, I was “happy” this Memorial Day Weekend to have caught a PBS special about an elderly group of World War II fighter pilots who traveled from all parts of the country to attend their last reunion around the dedication ceremonies of the World War II Memorial in our nation’s capital.

It was especially poignant for me, having spent eight years (and just about every skill in my PR arsenal) to work alongside the American Battle Monuments Commission to bring the World War II Memorial to life that glorious sunny day on May 29, 2004. (See picture above.)

Some 160,000 octogenarians gathered on the National Mall to hear from the likes of Tom Hanks, Pres. Bush, Tom Brokaw and Sen. Bob Dole, while Presidents George HW Bush and Bill Clinton sat in the audience. But the day was not about the politicians, celebrities and famous newscasters on hand. Dedication Day belonged to those who fought selflessly to save the world more than 60 years earlier, and who were dying at a rate of a thousand per day.

No matter how much this administration deceived the American people into attacking Iraq, and regardless of how Mr. Bush and his followers continue to fog the reality of this historical blunder, today we must honor our past and present soldiers who have made the ultimate sacrifice for our nation.