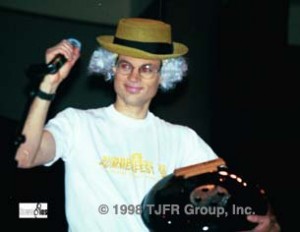 Lots of media news today. Where to begin? Conde Nast’s astute editorial bundling of its bridal books online or Time Inc’s bundling of its ad sales departments at its business books?

What about Ms. Couric’s presumed ascendancy to Dan and Walter’s pedestal. (My prediction: she may get to sleep later, but when word’s out on the size of the deal, a ratings miracle will be necessary to avoid the harsh media spotlight. I give it less than a year.)

I think I’ll take a look at Christopher Byron’s caustic take on the SEC’s zealous crusade against journalists wherein he likens The Financial Follies to the sleazy workings of disgraced lobbyist Jack Abramoff. The Follies, if you didn’t know, is the fundraising dinner and show hosted by the New York Financial Writers Association. The monies raised go to journalism scholarships. (Attendees take special glee in perusing the program to see which agency took the most tables — an indication of the firm’s fiscal health that year.)

“Soon enough, all such events could come under the disruptive and skeptical gaze of the regulators. It seems a bit odd to think of the New York Financial Writers’ annual black-tie event – known as the Financial Follies – as an institutionalized form of sell-side market rigging. But what else is it really?

This year’s Follies will be held in October at the Marriott Marquis in Times Square, where companies and investment firms alike will pay $3,000 per table in order to schmooze up their guests for the evening.

By tradition, those guests, attending free of charge, will be the financial writers covering the activities of their corporate hosts for the rest of the year. (An arrangement that could make even Jack Abramoff blush.)”

It’s all fun, and in the eight or nine times I’ve attended over the last decade, there has never been the slightest semblance of a quid pro quo between the partying PR people who purchased tables, and their journalist guests. All I’ve ever observed were a handful of very strange, but very short-lived couplings.