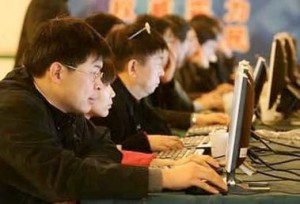 When this blog first visited the subject of how China would handle a sharply focused media spotlight, it recognized the immense public relations challenge that lied ahead for the Chinese authorities, the IOC, and their respective outside agencies.

Thus far, the series of gaffes and misdeeds have by and large been washed away by the fluidity of 24/7 news cycles (and the public’s short attention spans).

We’ve seen the Chinese avoid a full-throttled public backlash from fake fireworks and that Milli Vinilli moment at the opening ceremonies, the dissolution this week of daily media briefings, and the ill treatment of dozens who filed formal applications to protest in government-designated protest areas.

Most recently, this includes two 70-something women that the government stiffed after demolishing their homes as part of the Olympic whitewash. For their transgressions, the authorities will ship them off for “re-education.”

But after 12 days of pomp and pageantry, the cumulative effect of China’s efforts to command and control its image — at the expensive of civil liberties — may finally be getting its come-uppance.

The straw that may just break the camel’s back involves the incongruous confluence of two of the planet’s biggest brands: China and the iPod. Huh?

Today, we learn that the country that built the Great Wall has erected an even Greater Firewall by banning access to iTunes. From Huffington Post:

But the latest wrong move will be harder to cover up, that of course being China’s decision late Tuesday to block iTunes in China. News of the blockage surfaced first in a discussion on Apple’s site, and later in a blog by F.X. Leach on Students for a Free Tibet’s website but as yet there is no official comment on why Itunes [sic] got the cyber-shaft by the Great Firewall of China.

There is a silver-lining for those charged with managing China’s image. The media spotlight focuses elsewhere with this Sunday’s closing ceremonies. Did you hear today that a Russian general threatened to attack Poland?