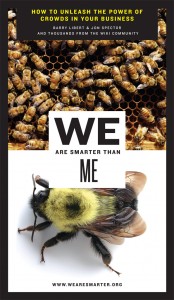 We Are Smarter Than Me is a book project with which I’ve been involved professionally for much of the last year. It’s not just any book, but the first to look at how companies have successfuly deployed collaborative and social networking technologies and architectures across their enterprises, and we’re not just talking consumer marketing.

More significantly, the book’s purveyors – the Wharton School, MIT Sloan School of Management, Pearson Publishing, and Woburn, Ma-based Shared Insights, set out to practice what it expected their book to preach. They collectively invited many thousands of their “expert” constituents to join regulars to write the book as a wiki.

A crowd of some 4000 people ultimately signed on to share their wisdom, though not necessarily in the way the project’s drivers envisioned. At one point, one of the chapter heads attempted to alter the wiki code to better suit his needs. In fact, a great deal of the book’s content was derived through comments, posts, bulletin boards, and podcasts, especially coming out of last year’s inaugural Community 2.0 Conference in Vegas, in addition to the wiki entries.

The independence of this crowd only underscored the futility of trying to dictate the manner in which a crowd behaves. After all, this was not an exercise in sheep herding, as everyone soon came to recognize. The community of contributors were engaged by the project, but on their terms.

What eventually emerged from the creation process was a fresh, if not eye-opening set of compelling cases that should silence managers who cling to the status quo. Wikinomics author Don Tapscott penned the Foreward to We Are Smarter than Me: How to Unleash the Power of Crowds in Your Business. Areas covered and cases cited include:

In fact, Shared Insights’ Barry Libert just sent me a link to a WSJ.com video about a partnership between Pfizer and SERMO, an online network of doctors who anonymously share their patient treatment experiences. If big pharma can overcome the expected regulatory hurdles of community-building with physicians, then there will be few excuses for others to ignore the wisdom of the crowds.