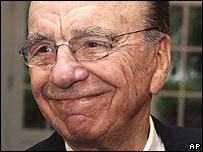 Jeff Trachtenberg worked late tonight. The intractable publishing industry reporter for The Journal dashed off a short piece on the firing of Judith Regan by either her boss at Harper Collins or her bigger boss at News Corp.

This was inevitable. There are some things that just won’t wash clean no matter how many PR-driven apologies are made. Think H-P’s Patricia Dunn. Hell. Think Lady Macbeth.

Ms. Regan did issue a public statement in the wake of the OJ fiasco, which, in my opinion, droned on and on, but simply didn’t add up. Short, heartfelt, cogent and plausible usually works best.

What’s unfortunate (for Ms. Regan) is that the whole sordid endeavor was likely green-lighted by her big boss, and he’s no worse off for it.