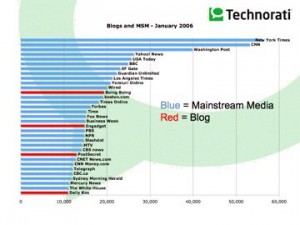 Invariably, the notion of the media “exclusive” surfaces at every PR seminar or journalist roundtable attended by PR practitioners. When should they be offered and whom do you [media person] consider as your competitors?

I have written frequently over the years about the double-edged sword awaiting exclusive-givers, but this was prior to the democratization of the media wherein anyone’s a publisher whose work can take root and multiply in the global media ecosystem.

Bob Scoble raised the issue again this past week, and more or less called for the dissolution of the PR practice of offering exclusives.

“Are we seeing the death of the exclusive? I hope so. That’s what I’m fighting for. The ‘A- list’ should have access to info as soon as the ‘Z-list’ does.”

Hooray! I applaud the Scobleizer. Wouldn’t it be great and make our lives so much easier to treat all media – mainstream and citizen types — on a level playing field when it comes to doling out news? It is, after all, the logical extension of “Reg FD” wherein journalists, analysts and now citizens are treated equitably by newsmakers.

In fact, I always have strongly advised PR pros to offer their clients’ news concurrently to all media for fear of alienating some AP reporter or havng to endure the ire of a ticked-off Wall Street Journal writer who just read your client’s news…exclusively in Business Week.

However noble the Scoble notion, there’s one small, and intractable problem: many top tier journalists insist on exclusives from newsmakers (and their PR reps). If “Today” has a guest in-studio, GMA won’t take him. If The Times ad columnist Stuart Elliott reports on a new campaign, don’t expect The Journal’s Brian Steinberg or USA Today’s Theresa Howard to follow.

In fact, it’s common for PR practitioners to be told point blank by “star” reporters that unless it’s an exclusive — no matter how newsworthy the pitch — their outlets simply won’t report the story.

So here we are, PR people, caught between a rock and a hard place. Do we offer the exclusive, which gives the news more allure and recipient journalists more cache with their editors — or announce the news simultaneously to the world? And in announcing to the A and Z lists, what’s the most efficacious means for doing so?

Keep in mind that many A-list bloggers are as enamored with (and insistent upon) the exclusive as their dead tree counterparts. Or maybe Denton and Calacanis should not be considered typical bloggers? I don’t subscribe to the notion that the news release is dead, however. It just looks and behaves differently than in the past.