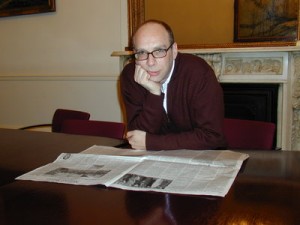 …be “good listeners” and avoid making “mistakes by jumping to wrong conclusions, being inattentive to the person theyâ€™re talking to, being impatient, doing only one interview and losing their temper.”

(The Jack Bauer school of interviewing didn’t come up.)

Compare and contrast the agents’ advice with the observations that appeared in a column of someone not unaccustomed to the ways of the Feds. Howard Kurtz, Washington Post media reporter and host of “Reliable Sources,” began his column today with:

“The humble interview, the linchpin of journalism for centuries, is under assault. It is a transaction that clearly favors the person asking the questions. A print reporter writes down someone’s answers, then picks and chooses how much, if any, to use, how to frame the quotes and where to put any contrary information. Television correspondents slice and dice taped interviews in similar fashion.”

Gosh darn! Now I know why clients rarely like their quotes. But have faith — the rules of media engagement are changing.

A while ago, this blog reported on Mark Cuban’s pathbreaking move to self-publish the unedited e-mail exchange between himself and the M&A reporter for The New York Times. Cuban was distinctly unhappy with how his printed remarks jibed with what he actually said (or meant).

Then, a few weeks ago, we slogged through a long rant from the pedantic professor Jay Rosen (pictured above) who complained how his Times-printed quotes were used to meet the journalist’s agenda, not his own. The professor, who seems to have a thing for his hometown broadsheet, sounded strangely like all those hyper-sensitive clients who believed they were wronged by the evil media filter.

Since this blog is ostensibly written for the PR set, the redeeming take-away can be found in a quote from the provocative professor:

All the usual suspects chimed in on the debate:

“Jason Calcanis [sic], chief executive of Weblogs Inc. [double sic], says on his blog that ‘journalists have been burning subjects for so long with paraphrased quotes, half quotes, and misquotes that I think a lot of folks (especially ones who don’t need the press) are taking an email only interview policy.’

Veteran magazine editor Jeff Jarvis adds at his BuzzMachine blog: ‘Are interviews about information or gotcha moments? . . . Isn’t it better to get considered, complete answers?'”

Since it’s his column, Mr. Kurtz weighed in with these weighty words:

“But let me say a word in defense of face-to-face discussions, or even telephone chats. When you see someone’s expressions or listen to someone’s voice, you get a sense of the person that words on a screen lack. A back-and-forth in real time often leads to illuminating moments. And, of course, typed answers can be rather bloodless — and they make it impossible for me to write, he said with a smile:)…”

Though he does demure a bit:

Since journalism is the art of compression, it’s not a bad idea for news organizations to post transcripts or videotape of entire interviews so readers and viewers can judge the process for themselves.

So there you have it, or maybe not. The persistent professor prolonged the punditry by posting this today.