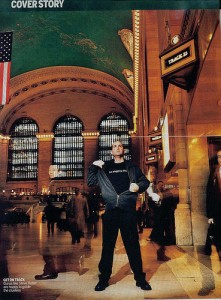 You have to admire Steve Rubel. Sure, many PR people are jealous of his high ranking (89) on the Technorati stats or that he’s become a really famous PR person. (I wonder if he even considers himself a PR person?)

Seriously, I don’t know how Steve managed to get his Google Reader so finely tuned that it consistently spits out all the latest news about the widgets and gadgets, digi-trends and tools that many of us hope to eventually figure out how to use (and prosper from).

His musings, links and prognostications really offer tremendous value to anyone toiling in our space (and elsewhere). He also happens to be on top of his game right now. (I say this in spite of having never benefited from any micropersuasive link love.) Richard, Rick and company are fortunate to have him, let alone his blogging authority. Andy and Ralph probably have some regrets losing him, but they’re a most creative group so no worries there.

What impresses me most about Steve, however, has less to do with the cool currency he passionately pops onto our LCD screens each day, but that he has the temerity to cover certain subjects at all. Take for example his posting over the weekend, “Turning Google Mail into Your Personal Nerve Center,” in which he wrote:

“However, in recent weeks I have started using Gmail as much more than an email host. With its gobs of storage, speed and tremendous search/tagging capabilities, you can transform it into a personal nerve center that’s available from any computer or mobile device. When you tap into this power and combine Gmail with some other tools, it is perhaps the most essential site ever developed. Most of the following life hacks have not been documented.”

This homage to the arch nemesis of one of his agency’s biggest clients likely rankled some, but Microspersuasion is now a bona fide news outlet that somehow manages to straddle both the calling of his employer and that of true journalism. There is much to be said (and admired) for that.