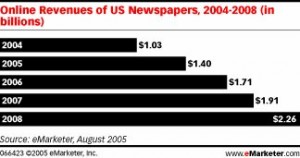 Some years ago, during the nascent days of the Internet, the newspaper industry, as embodied by its national trade association the NAA, believed itself to be disadvantaged.

You see, the barometer of the medium’s health, the Audit Bureau of Circulation, only measured circulation, e.g., single copy sales at newsstands and the actual number of subscribers. The industry’s glossy competitors, on the other hand, used readership data, which reflected pass-along copies.

In fact, it also was apples to oranges when comparing newspapers to the TV biz, which measured viewers (e.g., # of households times persons per HH). So newspapers believed, rightly so, that they were being short-changed — especially in the eyes of eyeball-counting advertisers. Our advice: level the playing field.

The CMI or Competitive Media Index was born, and issued around the time the ABC numbers came out. If my memory serves me well, CMI took data from Scarborough Research to create, for the first time, a “true” medium-to-medium comparison using newspaper readership data (versus straight circulation). At the time, I also remember telling the NAA that newspapers needed to somehow assimilate the growing online audience for their same-branded websites (and then monetize that data with increased ad rates.)

The data, from Nielsen NetRatings, was released yesterday by the NAA, which has more than a passing interest in bolstering the maligned medium. From the NAA’s head of marketing:

So now that the numbers are there, tell me how long it will take for the beleagured industry to use this data to restore its fiscal and reputational health.