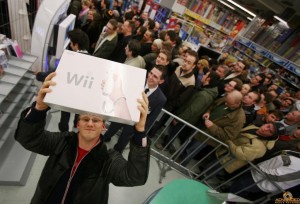 How many TV commercials do we currently see promoting Nintendo’s runaway video game machine, the Wii? Not too many given the player’s impossible-to-find status.

The machines are so newsworthily scarce, some have accused the Japanese manufacturer of manufacturing the shortage. I mean what better way to drive demand, than by creating it? Or, doesn’t one’s desire for something grow when the object of desire is unattainable?

Tyre reports than three-quarters of the nation’s four-year colleges reported an increase in the number of applicants, and this year the numbers are expected to break new records.

So what kind of public relations nightmare would ensue if Nintendo turned on the marketing spigot to drive greater sales of the stealthy Wii? Don’t even ask. Yet, in spite of a record number of college applications, and the heartbreaking rejections that come along with them, the nation’s colleges and universities have not curtailed their student-generating marketing programs. Quite the contrary:

“…colleges are spending big bucks on marketing, about $2,000 per student, to keep applications rolling in. And it’s not just glossy brochures and interactive Web sites. Ball State, for instance, recently hiredhttp://www.blogger.com/img/gl.link.gif a public relations firm to create a brand image for the school and come up with a tag line (“Education, redefined”). These days the university advertises itself on billboards and through a series of slick television ads. When it comes to marketing, “sometimes it feels like we’re all locked in an arms race,” admits Bryn Mawr admissions chief Jenny Rickard. “But no college wants to back away,” even though they are getting more than enough applicants to keep their institutions healthy.”

As someone whose business benefits from a bigger marketing spend, I still can’t rationalize the unabashed efforts by universities to attract even more student applicants. Perhaps some college administrator will eventually learn of the greater value that can be derived by creatively spending their marketing dollars less dispassionately. (Hopefully it’ll happen before 2015 when “the number of high-school graduates will begin to drop back out of the stratosphere.”