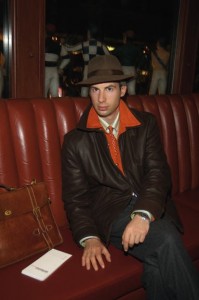 The moment I saw the Daily News gleefully blast on its cover* and first two pages of its news hole the scandalous news about its uptown (and a little east) rival, I sensed there would be some fodder for this blogger in there somewhere…eventually. So I’ve been following it a bit, and there it was tonight — a PR angle.

For the disconnected crowd, this is the story of former “Page Six” staffer (and now contributor) Jared Paul Stern’s alleged extortion attempt of supermarket mogul Ron Burkle. Mr. Stern demanded $100 grand and $10K a month in exchange for spiking anything negative being published in the premier gossip column about the big Democratic contributor and Hollywood man-about-town. The whole affair has prompted an FBI investigation.

The story ripened for this blog when ABC “World News This Weekend” (of all places!) interviewed Mr. Stern’s celebrity lawyer Ed Hayes (didn’t he rep 15-minute famer Andy Warhol and recently lose the mob cop case?) who calmly explained that his client was simply offering Mr. Burkle his services as a publicist.

Huh? Did I hear that correctly? Mr. Stern intends to use the “It was a PR new biz presentation” defense??? (It’s not online just yet.)

Now even if Mr. Stern was looking to jump over to the dark side, as some media types like to characterize the move from journalism to PR, would any PR person in his or her right mind make the guarantee he made? Moreover, who’d have the audacity to demand a hundred thousand and 10 grand a month to provide “protection” from a single, albeit media catalytic outlet? Talk about value billing!

Ed, I wish you well with Mr. Stern’s legal defense. But somehow I’m not so sure this tactic will fly.

* True to form, the New York Post, home to “Page Six,” claims to have scooped its downtown (and a little west) rival by posting news of (this) Stern first on its website.