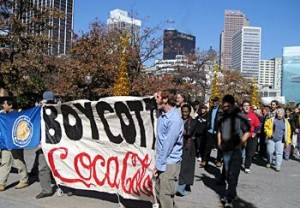 Since when is SEM seen as a duplicitous ploy to influence public opinion? If you’re Coke, that’s just what some allege. One of the world’s most celebrated brands has turned to (what I assumed was) a common search engine strategy to set the record straight on heinous allegations that the company’s alleged anti-union activities in Columbia somehow involved death squads.

Huh? Could it be? The “real thing” and death squads in the land of the coca bean? Highly unlikely, but the stories persist, especially on college campuses. Smartly, the Hotlanta company, using Google AdWords, purchased key search terms, like “killer Coke,” so that when someone searched on the term, the company’s text-based advertorial message would pop on the right side of the organic results rankings page.

My friend Rob Key of Converseon has built a strong business on what he calls “search engine reputation management,” which is a must for any company plagued by rogue websites determined to take it down on the reputation ladder. To understand where it’s all headed — both from a marketing communications and crisis management perspective, grab a copy of John Battelle’s The Search.

In the interim, Coke’s PR counselors are astute to use search engine marketing to directly speak to those intent on learning the truth about “the carbonated cola’s crisis in Columbia.

PS While we’re talking about AdWords, I just noticed that The New York Times appears to have “purchased” the names of every one of its reporters. Key in to Google the name of a Times scribe and a link to nytimes.com pops on the right.