In a November 1969 speech, the much beleaguered U.S. President Richard Nixon borrowed a page from the Frank Luntz book of deceptive, but catchy phrases when he said:

“And so tonightâ€”to you, the great silent majority of my fellow Americansâ€”I ask for your support.”

The term silent majority entered the American lexicon. It was a euphemism for all those domiciled Americans Mr. Nixon believed represented the prevailing sentiment on the issues of the day, but lacked the wherewithal to express themselves. Personally, I never believed that a majority of Americans — silent or not — supported the policies of this infamous President, especially as it concerned the Vietnam War. (The GOP had an uncanny way of misconstruing reality even back then.)

Surveying the current political landscape, I believe that today’s silent majority — the ideological antithesis of those Mr. Nixon imagined — has found an effective means to have their voices heard, often from the comfort of their own homes. Three recent incidents have led me to this conclusion: the Komen reversal, the SOPA defeat & BofA’s withdrawal of its $5 debit card fee. 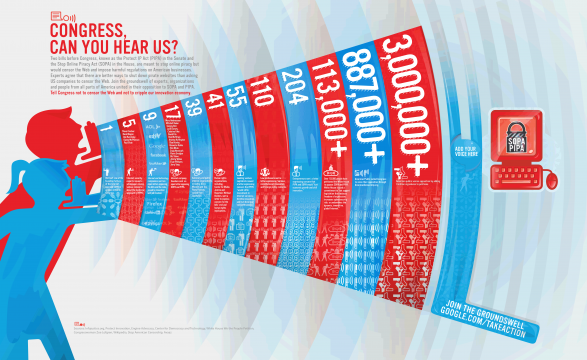 As Congress debated both SOPA and PIPA — two bills that could indelibly change the open nature of the Internet — the social majority flexed its muscles. It produced a groundswell of popular defiance that manifested on Twitter, Facebook and Google+, which in turn migrated into mainstream news reports. The social majority produced such a loud drumbeat, it compelled any self-preserving lawmaker to withdraw his/her support for the bills.

“So what changed these politicians minds about the Stop Online Piracy Act and its Senate equivalent, the Protect IP Act? And what got other lawmakers — who had previously said nothing about the two bills — to suddenly come out against them?

A new graphic from visual.ly suggests both the blackout and pressure from citizens who became more aware of what the two bills could do to certain websites deserve credit for the reversals.”

As for the Susan B. Komen debacle on which every PR pundit I know has already weighed in, it’s significant to note how the social majority once again showed their strength via their keyboards and mobile devices.

This newly empowered plurality of Americans forced the organization into a 180-degree change in policy and its in-house Republican operative (who I suspect colluded with the Florida Congressman) to resign. Writng for Social Media Today, Glenn Gaudet warns:

“Brands beware. The era of social advocacy is here, and you better be engaged, or the good work youâ€™ve done for years can be placed in jeopardy in a minute. Just ask the Susan G Komen Foundation which is reeling due to a backlash fueled by social media.”

From Gaudet’s post: Consider that a search of the â€œSusan G. Komen Foundationâ€ on Facebook now yields a growing list of anti-Komen pages as the top of the search results.

Things did not fare much better over on Twitter. The Komen Foundationâ€™s Twitter posting activity prior to the crisis was minimal, which is to be expected, but when the crisis hit, their reach grew to nearly 1 million.

These examples provide a glimpse of the power of the social majority to persuade and produce tangible results. This is especially significant as we enter what will be the most acrimonious election seasons in modern history.

In spite of Mr. Obama’s shortcomings, 83% of Americans supported the policy proposals he floated in his State of the Union address. This fact alone bodes well for his political prospects — that is, of course, if the social majority rallies behind him.

HuffPost’s namesake Arianna Huffington weighed in on the phenomenon:

“The recent reversal by the Susan G. Komen foundation of its decision to no longer fund grants to Planned Parenthood has, rightly, been hailed by many as a victory for the galvanizing power of the Internet. This comes not long after similar instances of Internet-fueled wins, such as the reversal of Bank of America’s decision to impose a $5 debit card fee late last year, and the derailing of the Stop Online Piracy Act in January.”


“Of course, the social media element in this story can’t be overstated. It’s what gave the public the power to fight back against this overt politicization. In fact, the story is a case study in how radically social media have changed the way institutions relate to those they purport to serve. And it’s not just by giving the public a microphone — but also by serving as a real-time X-ray machine able to see through and vet motives and decision-making rationales.”

It is my opinion that Mr. Nixon’s once-silent majority — to whom social media has now given voice — are not whom Mr. Nixon envisioned when he called on them for their support. In fact, I’m sure he is turning over in his grave at the thought of who they actually are and what their new-found power of political persuasion portends.  I imagine his progeny also are unsettled by this.