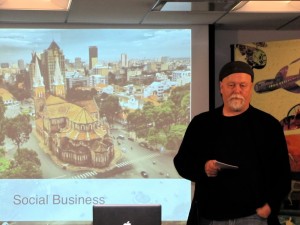 I had a chance to hear Mr. Boyd’s overview of the business world’s new social order, the acerbic and entertaining wit of The Onion’s twitterific Baratunde Thurston, the erudition of NYU’s Jay Rosen waxing on open source journalism, and observations of the business-cultural shift from FH’s own Joshua Michele-Ross. 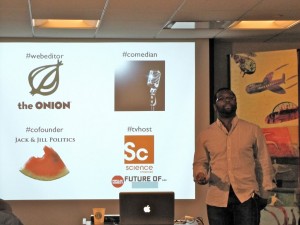 Here are some of the notable quotables I gleaned from Stowe’s introductory monologue (RT: approx 22 minutes; Forgive noisy audio up front):

“To really have a social business, you really have to rethink things at a fundamental level.

“In 1999, I noticed a new category of software emerging…it wasn’t about being more efficient. It wasn’t about number-crunching. It was about shaping culture. So I decided to use the term ‘social tools’ because it seemed so profoundly, different…”

“We can expect that social businesses of the future will be more fluid and less solid than we think of them today. There will be people cooperating and competing for resources in a way that is probably not generally supported or even allowed in a lot of businesses.”

“And as in a village, reputation will be significantly more important than titles, and connections to other people will be significantly more important than rank or popularity. And authority will be derived from social capital not control. So the maxim you can walk away with around this idea is that I am made greater by the sum of my connections…”

Also in New York this week we find Jeff Pulver‘s pumped up 140 Character Conference, celebrating all things Twitter. It starts today and runs two days. Great line-up of speakers. I did however find the qualifications for obtaining press creds rather curious:

Press passes will only be issued to members of the Working Media who are also members of editorial staffs. Press passes will not be issued to non-editorial staff, equity analysts or to PR firms. For consideration please email a copy of your press credentials together with a story that you have written within the past three months that has been published to: jeff@pulver.com. If you are a freelancer, please be sure to include a copy of your assignment letter for consideration. We have a limited amount of space for members of the media and each application will be considered for itâ€™s [sic] merit. Credentials must be sent in order for the submission to be considered.

This line threw me: “…members of the Working Media who are also members of editorial staffs.” Independent bloggers need not apply? Whatever. I’ll cut him some slack since the protocol for landing press credentials remains a work in progress nowadays.

On the left coast, the annual Society of New Communications Research kicks off its Newcomm Forum 2010 confab in the Valley today with a range of high-value communications-minded speakers and topics that include KD Paine (“Defining Social Media ROI”), Paul Gillin (“B2B Social Media Marketing – Really!”), Jen McClure (“Intro to Social CRM: Panel Discussion”), JD Lasica (“The Path to the New Jounalism”), Jackie Huba (“The One Percenters: Twitterers, Bloggers & Facebookers Who Influence Opinions”), Shel Israel (“Blurring Boundaries”), Maggie Fox (“Building Channel: Understanding the New Media Landscape”), and the list of social media luminaries goes on. I truly wish I was there.

Then we have Vanity Fair and Harpo Studio teaming up for a morning get-together at the Harvard Club in New York with the likes of Michael Eisner, Gary Vaynerchuk, Seth Godin, Tom Peters and others to talk about the “business models of tomorrow.”

On the horizon are a couple of gatherings in which this PR person will play a physical role. The first is PRSA’s Digital Impact Conference where I’ll preside over a panel on the afternoon of May 7 featuring Kami Huyse, Joe Jaffe and Soraya Darabi. And then on May 12, the Publicity Club of NY will host a handful of the leaders in the local/hyperlocal media revolution including The New York Times, AOL Patch. NBC NY, Gothamist and Lost Remote.

Hope to see you in-person in May!