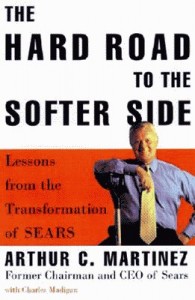 Over the weekend, I caught a “Marketwatch” segment on NewsRadio 88 concerning Wal-Mart’s plans to “go green.” The giant retailer’s environmental conscience has suddenly emerged with plans to test hundreds of organic products in select stores.

This news follows by a week the national media pop of Wal-Mart’s decision to stop selling guns in some of its stores, which in turn followed news of its surprising fortitude in the face of the American Family Association’s efforts to thwart sales of the DVD release of “Brokeback Mountain.” The AFA, which represents many in the retailer’s core customer “base,” objected to the in-store signage for the acclaimed film.

What gives? Do these seemingly disparate events constitute a coincidence or concerted campaign? If Wal-Mart’s efforts are truly earnest, who can argue with the cumlative role they might play in the company’s efforts to remake its battered image?

In fact, tomorrow the Arkansas retailer will opens its usually closed kimona to journalists for a two-day gathering that will “focus on the customer” (as opposed to its own employees). From CNNMoney.com: “…industry observers caution that Wal-Mart’s efforts to get warm and fuzzy with the media are simply a means to protect its image amidst damaging public relations setbacks…”

Are these PR ploys to gloss over the giant retailer’s reputational woes — as some have suggested — or has Wal-Mart turned a new leaf? My guess is that by holding the two-day media event in Rogers, Arkansas (as opposed to Vegas), its organizers are hoping that what happens there doesn’t stay there.