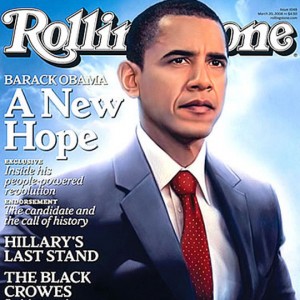 It would be fairly easy to jump on The New Yorker-bashing bandwagon today for its satirical cover featuring Barack and Michelle Obama as fictionalized Muslim terrorist and fist-bumping radical, respectively.

It would be easy if one didn’t truly get the shock culture of CondÃ© Nast wherein David Remnick’s glossed-out siblings have few qualms about popping former (and current) substance abusers on their covers and celebrity miscreants inside their books.

It’s all about single copy sales, stupid, and in that department, this week’s well-intentioned, yet ill-conceived New Yorker cover buzz-handedly accomplishes the task (though perhaps at the expense of paid subs). The inside text, btw, does provides some thoughtful context for Senator Obama’s political career. But, as we used to say, we read Playboy for the articles too.

Separately, the most emailed story in today’s New York Times is not a story at all. It’s an op-ed written by that youthful (and now unintentionally smeared) Senator from Illinois outlining his plan for Iraq. It speaks volumes about the readers of The New York Times.

In defending the New Yorker cover, some pundits explained that the magazine’s sophisticated readers know the difference between satire and reality. Yet, somehow I don’t see The New York Times ever taking this kind of tack. As Bob Cesca writes in the pro-Obama Huffington Post, this “bad satire” transcends the “peawits” and will only fuel the Rovian rumors.

What surprised me was how the PR team at The New Yorker didn’t fully anticipate the firestorm. Yesterday’s voluminous news release, while leading with a cursory mention of the incendiary cover art, droned on about the piece inside. Didn’t they figure that the cover art might need a little more than a single sentence of explanation?

Had they, would it have been necessary for David Remnick to have availed himself (via email it seems) to HuffPost’s Rachel Sklar? Would the magazine have had to issue the following clarifying statement about its cover, which it says:

“...combines a number of fantastical images about the Obamas and shows them for the obvious distortions they are. The burning flag, the nationalist-radical and Islamic outfits, the fist-bump, the portrait on the wall? All of them echo one attack or another,” the magazine said in the statement. “Satire is part of what we do, and it is meant to bring things out into the open, to hold up a mirror to prejudice, the hateful, and the absurd. And that’s the spirit of this cover.”

I guess, but there are many registered voters who will not see the “obvious distortion,” and instead see this as a validation of the malicious rumors that regularly cross their desktops. For that reason, the cover didn’t do it for me.