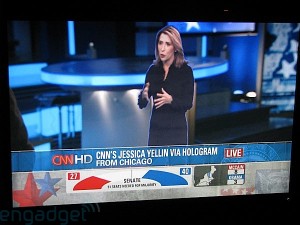 So how did you embellish your election viewing last night? Was it with one of the electoral widgets many of the digitally minded news organizations offered up for download? Did you register for real-time results delivered via SMS to your mobile phone?

Or did you simply plop yourself in front of the flat screen TV with laptop on laptop to supplement CNNHD’s election night coverage, highlighted by a Star Trek-like holographic transport of pundits to its studios? (photo)

To that last point, I wonder whether these austere times, let alone Time-Warner’s stock price, call for something less over-the-top than the 35 high-def cameras needed to create the Princess Lea-like illusion? Cisco’s Telepresence, perhaps? No matter. It was an historic evening.

As for me, I was on the couch in front of a SONY Bravia 52″ LCD teathered to the Internet via my crackberry, shuttling between Twitter Mobile and GoogleTalk, with an occassional email and text message thrown in for good measure.

I initially scoped out Twitter’s mass election feed, but found its discourse too far-afield to arouse any personal passion. It was then I began to truly appreciate the 250+ Twitter “friends” whom I’ve judiciously selected to follow over the last year. They are comprised of a cross-section of thought leaders and characters from the worlds of media, marketing, technology, PR and politics. All have strong opinions and few have qualms about sharing them.

So with all the pre-election inducements to buddy up with one of the broadband-delivered, graphically fueled dynamic news sites, I found myself most buoyed and informed by the 140-character text-driven thoughts that crossed my 2.75″ screen.

For me, the real magic of this micro-blogging platfiorm lies in its sometimes voyeuristic, but often alluring idea exchange between those whose opinions I care about. It has become for me a modern day equivalent of the Algonquin Roundtable.

(Now if only Twitter didn’t require a manual refresh to dynamically advance these tweets.)