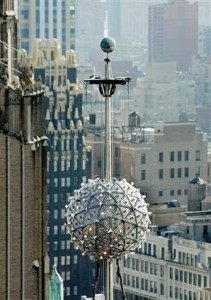 My friends over at NYConvergence today posted on the Times Square Alliance‘s (formerly Times Square BID) plans to further democratize the always hyperbolic New Year’s Eve ball drop. No fewer than “five separate story lines” will be video-streamed live online to anyone anywhere with a broadband Internet connect.

At the risk of dating myself, it was in 1998-99 and again in 1999-2000 that my friend Peter Kohlmann of the Times Square BID hired us for ostensibly the same reason. We worked alongside his perennial agency Howard J. Rubenstein to give the 92-year-old event a global TV (versus global digital) footprint.

Instead of feeding the tourist-driven video footage online – was that even possible then? – we uplinked live shots from a six-camera shoot to multiple international satellites for broadcasters around the globe to downlink (versus download) and air in their programming as they deemed editorially fit.

We also had to deploy our global PR network to convince each foreign broadcaster of the merits of using the free footage. Dozens did — from Japan to Brazil to much of western Europe.

As for me, I wouldn’t be caught dead in Times Square on New Year’s Eve. Peter K. was kind enough to send me a packet of original confetti and a certificate of appreciation marking the Millennium ball drop.