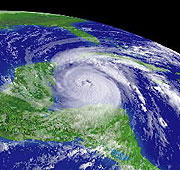 Some years ago, I worked on an assignment for the Mexican Ministry of Tourism wherein we were charged with putting in perspective the damage from the 1985 earthquake centered in Mexico City. The U.S. media coverage made it sound as if the entire city was wiped out when in fact the physical damage was relatively confined (albeit deadly). We dispatched helicopters with video crews to capture and disseminate the new footage, and prepared the top tourism official for appearances on the network morning shows and elsewhere. It was an effective strategy.

As we look at Wanda and the devastation it is creating in Cancun and Cozumel, the Mexican government today understandably is focused on the safety of its citizens, but tomorrow will grapple with the crippling of an industry that contributes such a vital revenue stream.

“Cancun is now one of the most popular resorts in the world. The Cancun area receives 35% of Mexico’s tourism revenue, and the percentage is growing. Tourists arrive daily from Asia, Latin America, Europe, Canada, the United States and Mexico.”

Can an effective public relations strategy help hasten the area’s rebound? How will Wanda affect tourism to other Mexican destinations?

Hong Kong and SARS, Phuket and the Tsunami, the Florida Keys…all have returned to some semblance of touristic normalcy. The PR-savvy tourism authorities for these destinations were aggressive in keeping the communication channels open with travel beat reporters and broadcasters. Their efforts no doubt hastened the fade in the collective tourist consciousness of those images of devastation. In Mexico, time too will heal, but pro-active communications when the time is ripe can help.