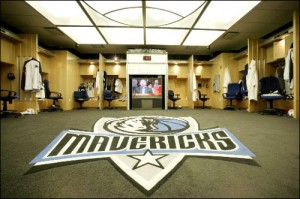 No. I’m not talking about “Client-9,” but rather A-list blogger Mark Cuban whose actions this week prompted a letter of protest to NBA Commish David Stern from the Society of Professional Journalists.

Mr. Cuban’ decided to ban full-time bloggers from his Dallas Maverick’s locker room. The feisty blogger explains his rationale (sort of) in a blog post this past Monday.

“So post my little newspaper rant, it comes down to something very simple. A blogger is a blogger is a blogger and there are millions of us. . The name on your check, if you get a check, is irrelevant. BlogMaverick, Belo, xyz.blogger.com, we is what we is, and as long as there is limited space in our locker room, we is going to be outside in the Press Interview room getting comments says the bans”

To make his point about the physical constraints of the Mavs’ locker room, he even linked to a picture (above). What a tool!

The SPJ believes Mr. Cuban instituted the ban as a result of a negative post written about him in the Dallas Morning News’ Mavs blog. There may be some credence in this theory since we’ve seen this retaliatory behavior from Mr. Cuban in the past. From the SPJ email alert:

However, the only news blogger to be permanently removed from the locker room is Morning News blogger Tim MacMahon, who also gathers quotes from players for beat writers. On Feb. 29, Cuban told MacMahon to leave the locker room, which was the same day MacMahon published a critical piece on Mavericks coach Avery Johnson.

The issue of whether to credential bloggers remains a valid one, and does involve some informed judgment about the validity of the blogger. In fact, the same rules should also apply to mainstream journalists. Perhaps this is why Mr. Cuban extended his ban to all bloggers so as to avoid making that judgment.

Mark, here’s my advice: either hire a savvy PR person to deal with your throngs of beat reporters, so you don’t have to, or take a small portion of your billions to expand the size of the locker room. I mean, Jason Kidd deserves no less. Finally, get thicker skin.

Update 3.13 – Mark Cuban elaborates …and them some