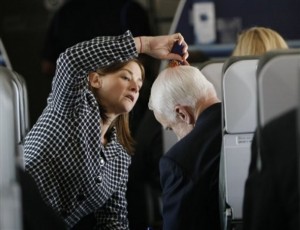 If you thought Ari Fleischer and Dana Perino were/are liars and apologists for this failed and deceitful administration, get ready to deal with Brooke Buchanan (pictured at left).

The McCain mouthpiece (and former Bush Cheney comms. director in Nevada) already is in Bush-style deception mode, if her quip to an AP reporter seeking comment on the libelous new piece of fiction that Senator McCain has tacitly endorsed is any indication:

An Associated Press reporter tried to ask McCain for a comment Friday in Aspen as journalists were being escorted from a brief photo opportunity. McCain smiled and said, ‘gotta keep your sense of humor.’ Campaign spokeswoman Brooke Buchanan said McCain did not hear the question, and the campaign had no comment.

To truly get a sense of her style, take a look at this video of her trying to command and control her way through a local TV interview…on a Fox station, no less.

Senator McCain’s refusal to denounce this racist book whose author we have learned is one of those 9/11 conspiracy nuts, should provide enough of a glimpse into the candidate’s flawed character to withhold your vote. His press secretary, a 2003 graduate of UNLV, is another.