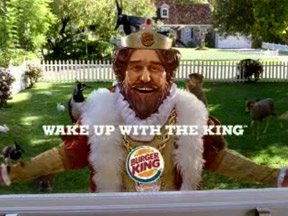 Christmas, move over. Happy Halloween, everyone! It’s amazing how big a business Halloween has become. But that’s not the subject of this posting. Rather, let’s look at PR people attending the masquerade ball.

Last week, Slate’s Seth Stevenson reported receiving a spate of unsolicited e-mails inquiring how to get hold of the weird Burger King mask. Like any good reporter, he became suspicious of the queries’ authenticity, and wondered whether he was being flamed in an effort to create a viral buzz for the QSR’s quirky maskot. He called BK’s ad agency and received a “mealy-mouthed” denial from a PR person. The Times wrote about the exchange this weekend.

As the PR profession continues to grapple with how to properly engage the blogosphere — in spite of many self-anointed pundits claiming they have the answers — I know one thing: deception is not one of them. It smacks of planting paid actors in bars to talk up a “trendy” new cocktail.

What’s unfortunate is that the purveyors of this maskerade are no doubt celebrating all the media attention their little deception generated. Do the ends really justify the means?