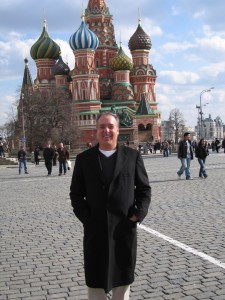 If you happen to be one of my scant few followers on Twitter, you would have learned that I spent much of last week in Moscow. I was invited there to give two speeches on the changed dynamics of PR these last few years. The audience: about 100 corporate communications chiefs from Russia’s largest companies. More on that in a second.

First, I should tell you that Moscow is a grimy city with horrendous traffic. Not only is the traffic terrible, but virtually every car is caked with dirt and all drivers behave like belligerent NYC taxi drivers playing chicken in traffic. Moreover, every Russian taxi driver tried to gouge me on the fare. This born-and-bred New Yorker had to haggle big time.

On the other hand, the Moscow Metro, dug deep under this bustling city, is a model of efficiency. The trains run every 50 seconds, each station is artistically and architecturally distinct, the cost to ride is 20 rubles (less than a $1), and the platforms are busy and apparently safe throughout the night. Could there be a Hopstop in its future?

Muscovites think their city is heads above all others. One woman tried to convince me that Moscow’s restaurants make New York City’s pale in comparison. Huh? I credited that notion to too much vodka in her daily diet. Still, the people are friendly and I didn’t notice any of the cloak and dagger stuff.

No matter what you say about Moscow, one thing’s for sure: it is most definitely a boom town. Someone told me that 30 billionaires and 100,000 millionaires live there. It is the epicenter of all business. St. Petersburg may be pretty, but it’s no Moscow when it comes to defining the new Russia. I should say that this blogger was a bit bothered by all that wealth, not so much because he could use some of it, but more for how it so blatantly manifested in clothes, cars and conspicuous consumption. Muscovites proudly and overtly display their new-found materialistic trappings.

My presentation focused on how the changed media landscape and the empowerment of citizens as journalists have caused a major re-think in how companies engage their customers. One attendee found it incredulous that a blogger would have the audacity to denigrate a company’s reputation, as was the case with the Comcast repairman video or Jeff Jarvis’s rants against Dell. Another asked whether it’s even legal to write negatively about a company or person. I cited the First Amendment, but also referenced the lawsuit brought against two former employees by Apple for divulging trade secrets.

I provided examples of CEOs who blog and companies that encourage/empower their employees to blog to demonstrate greater transparency…and hopefully improved reputations. I discussed the growing importance of search, and the migration of media consumers from offline to online, time-shifting included. I showed examples of some companies seeking the magic elixir for that holy grail of marketing – positive viral WOM — sometimes with unforeseen and unintended consequences.

Finally, I did have a chance to attend a party celebrating the one-year anniversary of “Business FM,” a new Moscow-based terrestrial radio station that its lawyer told me had gained profitability in less than five months. Held at the newly opened European Trade Center, an all-glass modern shopping mall on the Moscow River, the party, like everything else in monied Moscow, was totally over-the-top.

White tablecloths, expensive cognac and vodka on every table, revelers dressed to the nines, a ten-piece R&B band from the UK, cigar bar, and come-ons from Mercedes, real estate purveyors, jewelry dealers, etc. My companion asked me whether U.S. radio stations threw similar parties. I thought of the current travails of Clear Channel, smiled, and said, “No.”