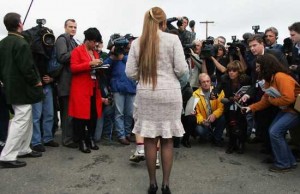 Serving as the primary conduit between a newsmaker in the news and the throngs of reporters clamoring for any new story angle can be a thrilling experience for a PR spokesperson. Most, I dare say, would even take on a client gratis if it meant more time in front of the cameras. (Sounds a little like trial attorneys, huh?)

Case in point: today’s news that Michael Jackson’s spokesperson has been let go – likely at the behest of the Gloved One’s lead attorney who didn’t “authorize” anyone to hold a news conference without his blessing. PR people and lawyers often find themselves at odds over how to manage the court of public opinion.

Anyway, Mr. Jackson’s spokesperson denied being told to beat it. She’s either in a “never can say goodbye” mode or wants to hang in long enough to deal with the unseemly allegations about her “client” that appear in the new book written by Mr. Jackson’s last (and long-time) spokesperson Bob Jones? My prediction: she’ll stay, but without pay.