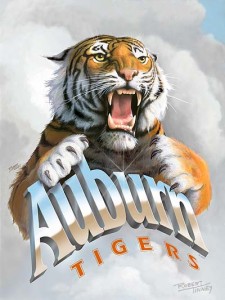 While the two professors were forced to resign, their tenure will keep them on as salaried employees. More significant was the seemingly lack of contrition or reasonable assignment of blame by Auburn interim president Ed Richardson:

“This is clearly an academic problem,” Richardson said Thursday during a news conference in the lobby of the school’s administration building. “Athletics is a minor player in an academic issue. Having said that, this is a matter of great concern to this administration.”

Also absent, from this blogger’s perspective, is any mention of this national story unfolding in his midst from Auburn’s esteemed Marcom professor and blogging pundit and protagonist Robert French. What’s what here, Robert?