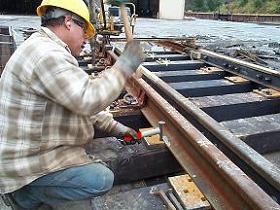 I stumbled upon a press release from one Lloyd Chapman, president of the American Small Business League, which alleges that White House’s PR operatives have killed a number of news stories across a range of MSM outlets. (Actually, it was Mr. Chapman’s name and the name of his organization that mostly were spiked.)

At issue is a brewing scandal involving the alleged diversion of Small Business Administration funds from small businesses to Fortune 500 companies like Wal-Mart and Boeing. The head of the organization says:

“White House PR firms have been working overtime to kill stories on Bush administration policies that have diverted over $300 billion in federal small business contracts to the top 2 percent of U.S. firms,” Chapman said.

Now, I’m not one to put it past this administration for currying favor with its biggest corporate donors. After all, we only need to look at the nation’s energy policy to understand the culture of corporate patronage that exists in the White House. It’s Mr. Chapman’s assertion that PR firms have the ability to spike MSM stories — barring a threat of legal action — that fell short in my mind.

The release cites a 2006 Office of Government Accountability report that found the Bush administration had spent “$1.6 billion over 30 months on public relations campaigns and advertising.” Mr. Chapman asserts that:

“…publications have suddenly dropped their stories on this issue after being pressured by White House public relations firms, including the Associated Press, USA Today, Wall Street Journal, Dallas Morning News, BusinessWeek, Inc Magazine, Entrepreneur, Fortune, Fortune Small Business and dozens of other smaller newspapers and magazines around the country.”

Mr. Chapman, you give us too much credit. Sure, we can balance a piece by offering up new facts, and we may even be able to kill a story should we overwhelm a reporter with enough information to render obsolete the story’s underlying premise. But, even the most influential PR operatives won’t lay claim to being able to kill a reasonably legitimate piece.

(Come to think of it, I do recall one legitimate Bush (ear)piece that I wish hadn’t been spiked.)