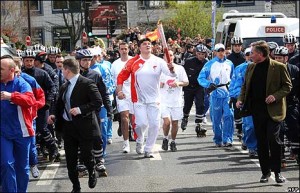 PR Week picked up on an FT report Friday that the Chinese government has invited a number of U.S. and UK PR firms to help it mitigate a most unwanted media spotlight.

The assignment would be separate from the work H&K has undertaken on behalf of the Beijing Olympics Organizing Committee, and instead focus on improving China’s torturous Tibetan-tainted image in advance of this summer’s games.

I wonder what kind of egg drop soup the invited firms will serve up to the Chinese, and more significantly, are the Chinese even prepared to follow the only real cure for what ails their government: a meaningful policy shift, i.e., a recognition of Tibetan rights? Only in this way can it extinguish the harsh media spotlight before that spotlight completely extinguishes the torch.

Let me digress. Since when does the torch relay provide proper kindling for political unrest? I remember my experience working on the Torch Run. The prospect for protests seemed as remote as the rural route the torch took. Coca-Cola’s Torch Run sponsorship enabled ordinary citizens to win a chance to carry the flame for a few hundred yards.

We captured video footage of the lay torch carriers and fed it via satellite to their hometown TV news programs. It was a swiss-cheesed video news feed strategy, and it worked. What ever happened to Samsung’s similar plan for this year?

Yet today, the torch has fallen prey to political protest.

“Never before has this happened,” said Anthony Bykerk, the secretary general of the International Society of Olympic Historians, of the protests surrounding the Olympic torch. “This is the first time that the torch relay has ever been an element of protest, it’s usually a very big celebration.”