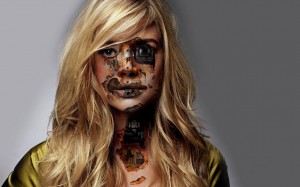 Well, at least she didn’t dangle a baby from a hotel balcony to impress the paparazzi. Instead, B-lister Denise Richards decided to jettison not one, but two laptops from her balcony beaning two old ladies below.

Her publicist blamed those pesky photogs for the ex Mrs. Charlie Sheen’s lunatic moment in Vancouver where she was filming some straight-to-video movie. Pay attention, Naomi.

“Based on the actions of the paparazzi, they are lucky their laptops were the only things that were thrown off the ledge,” Richards’ publicist, Nicole Perez, said in Los Angeles on Thursday. (A prepared statement?)

Maybe Panasonic should enlist the actress in a TV campaign to promote the company’s toughbook. Now there’s a spot that’ll go straight to YouTube giving the tertiary laptop maker a viral shot in the arm!

In typical Hollywood fashion, Ms. Richards (pictured as cyborg above) will likely have succeeded in giving her sleepy career the tawdry boost it needs. Right, Courtney?